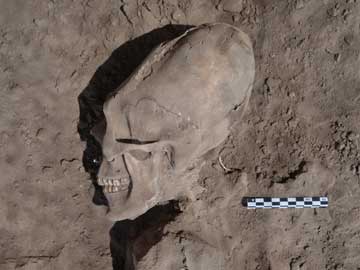 Archaeologists of the Institute of National Anthropology and History (INAH) said that: Mexican experts have found a cemetery in the State of Sonora several thousand years old that has features never seen before in the region and expanding the zone of influence of the Mesoamerican peoples,

INAH said in its statement —About 300 meters from the village of Onavas, southern Sonora, was an outdoor gravesite, the first pre-Hispanic cemetery, of that state which had been found in burials composed of 25 individuals, 13 of whom were intentional skull deformation.

The Institute said Five individuals also have dental mutilation and cranial deformation. Such cultural traditions are similar to pre-Hispanic communities in southern Sinaloa and northern Nayarit, but they have not been documented in Sonora.

Some skeletons wore ornaments made from shells and snails found in the region of the Gulf of California. They were  bangles, a nose ring, earrings, pendants and necklaces of shell beads.

Also, an individual was buried with a turtle shell placed at the height of the abdomen.

The INAH said that the burials were not accompanied by offerings.

For archaeologists, the discovery is relevant evidence of practices that were not recorded in the old Sonora cultural groups: cranial deformation (frontal occipital) was applied to 13 individuals, and modification by the wear of the side of teeth to give them a “V”.

“The area meets the unique finding that mixed expressions of groups of northern Mexico, as the use of ornaments made from sea shells Sea of Cortez (Gulf of California), with Western traditions never before found in Sonoran territory” , said archaeologist Cristina Garcia Moreno.

Garcia, director of the research project, which is conducted by Arizona State University, USA, with approval of the INAH Archaeology Council, said: “With this discovery extends the limit of influence of Mesoamerican peoples farther north: than had been recorded archeology” by previous archaeological finds.

The archaeologist noted that no other archaeological site in Sonora has been found where modifications are identified by cranial and denta modifications, nor have they been seen in the southwestern United States, which shares the cultural area with Sonora.

“The closest cultural groups who developed these traditions are in northern Sinaloa and the National Wetlands area (southern Sinaloa and northern Nayarit), who incorporated their culture some Western customs and Mesoamerica,” he explained.

However, he said, “Cemetery Onavas not in migratory Mesoamerican groups, but one who had a sedentary local development and that at some point in its history established contact with Mesoamerica and incorporated some ideas into their culture.”

He explained that according to historical sources, the site must have belonged to the old Pima Indians, the region’s cultural group whose descendants moved to what is now the Sonora-Chihuahua state line, and could be part of a settlement located in the area of traffic that followed the western coastal towns in the southwest U.S. which traded in  turquoise.

“And in that transition, the Pimas adopted new traditions from Mesoamerica,” he explained, adding that the datings performed on human remains Epiclassic match the Mesoamerican period (900-1200 AD).

Finally, archaeologist Cristina Garcia noted that these findings are giving rise to further research in the southeastern part of Sonora that has been little studied,

“the North, the desert, the Northeast and the coast are the most researched, from these findings it is known that the southeast is different from what was known, this side is completely new.”

Single One was buried with a turtle shell Placed at the height of the abdomen.