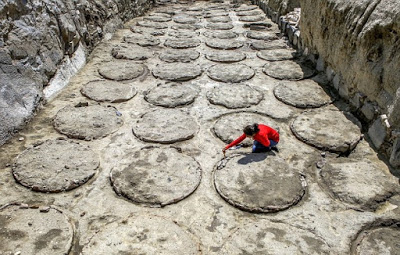 These archaeologists are painstakingly investigating to uncover the mysteries of an ancient kingdom using only a small hand trowel.

In Van, eastern Turkey, historians say they have discovered tombs dating back over 2,800 years.

The pithos burial chambers, which resemble large ceramic pots, are thought to date from the Kingdom of Urartu, which ruled the country from the mid-ninth century BC until the Medes defeated it.

The Urartian Kingdom’s capital was Vans until it fell early in the sixth century BC.

Every summer a team of around 50 archaeologists take part in an annual excavation at Van Fortress in a bid to uncover treasures that have been buried for thousands of years.

With permission from the country’s Ministry of Culture and Tourism university teams have been working together.

They are currently working at the top of the fortress, where a palace was located, and the northern quarter.

‘Our work is aimed at repairing and further protecting Old Van City,’ Dr Erkan Konyar from Istanbul University said according to Todays Zaman.

‘We are carrying out work to protect the areas that we have worked on in previous years. ‘

Just 38km from Van excavation work is also taking place at a Urartu Castle. This year they discovered part of the walls.

Head of Excavation Doç. Dr. Mehmet Işıklı, told Hurriyet Daily News: ‘This made us very excited, as even though these walls witnessed great earthquakes, their architecture remained quite robust and unchanged