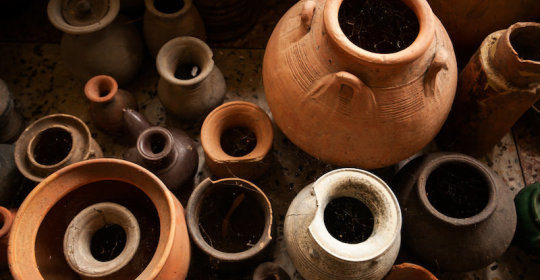 The pottery fragments found from a dig at the East London Shoreditch were successfully apported with an archaeological modern dating technique.

The “groundbreaking” new dating technique analyzes fatty acids rather than organic materials, and scientists at the University of Bristol who have developed the method has demonstrated their effectivity by dating ancient pottery samples from sites of known ages.

These include a pottery collection found below Shoreditch in eastern London that contains traces of meat and dairy products made and consumed by the descendants of the first farmers of Europe about 3,600 BC.

A new study by a team of scientific researchers from the University of Bristol in England published in Nature journal explains that pottery is one of Archaeology’s most commonly restored artefacts.

The use of the standard radiocarbon dating method is, however, the most difficult artefacts to date; but the new method is based on “accelerated mass spectrometry analysis” of residues of foodstuffs and fatty acids.

According to the paper, this new dating technique for pottery vessels has several advantages over the traditional method, as it can directly determine the period it was made.

It also identifies the origins of the organic residues found on the pottery, which helps scientists map when specific foodstuffs were exploited. What’s more, when testing their new method, they successfully dated dairy and carcass products in Neolithic vessels from Europe and Saharan Africa.

The team’s new method dates pottery with an accuracy to within around “one human lifespan” by analyzing the porous surfaces of pottery, which absorb fatty acids left over from foodstuffs. And speaking of this groundbreaking new method of directly dating archaeological pots, chemist Richard Evershed of the University of Bristol said it’s one of the “holy grails of archaeology.”

Having conceptualized this technique more than twenty years ago, the scientist says it wasn’t until the team established their own radiocarbon facility in Bristol that they “cracked it,” according to The Daily Mail.

Before this new method was approved, the researchers had to demonstrate that it could determine dates as accurately as samples of bones, seeds and wood and this was achieved by extracting fatty acids from ancient pottery at a range of key sites across Britain, Europe and Africa, known to be up to 8,000 years old.

The British sample is described in The Daily Mail as Neolithic “dirty dishes” dug up in Shoreditch at the Principal Place dig site, which is the foundations of Amazon’s new headquarters.

Shoreditch is a hipster haven for artists and clubbers and people who like to dress up as 19th-century cobblers through the day, and this hub of glassy office blocks interspersed with vintage clothes markets, indie coffee shops and cool co-working spaces is but a modern venire over a deeply ancient landscape.

Comprising 436 fragments from at least 24 separate vessels and weighing a total of nearly 6.5 kilos, the pottery included traces of goat, beef, lamb and dairy products, which the team were able to date to within a window of just 138 years, to around 3,600 BC.

This means the poetry was made and used around 5,600 years ago by ‘early East Enders’, descendants of Europe’s first farmers who arrived in Britain just four centuries earlier, who we now know ate a diet of dairy products from cows, sheep and goats.

This “remarkable collection” from Shoreditch helps to fill a “critical gap in London’s prehistory,” according to consultant prehistorian Jon Cotton of the Museum of London Archaeology, and he added that this is the “strongest evidence yet” that the people in the area later occupied by London lived “a less mobile, farming-based lifestyle during the Early Neolithic period.”

This evidence challenges the traditional archaeological view that hunting and gathering was the preferred survival method in the mid-fourth century BC by demonstrating the people in what would become Britain’s capital were more sedentary than thought.

Historic England’s head of scientific dating, who complied the statistical analysis in the new study, Alex Bayliss, said it is very difficult to overstate the importance of this advance to the archaeological community and that the opportunity to date different kinds of pottery much more securely will be “of great practical significance in the field of archaeology.”