An ancient statue with a pensive face was found in Italy 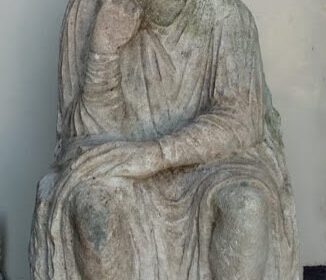 An ancient statue with a pensive face was found in Italy

In the countryside of Altino, an ancient settlement and an archeological site overlooking the North Lagoon of Venice, A sculpture from Roman times, mostly intact, depicting a male figure sitting on a rock, with his bust leaning forward and curved back, was found

The report to the Superintendent of Archaeology, Fine Arts and Landscape of the City of Venice and the Lagoon, and to the Carabinieri of the Nucleo Tutela Patrimonio Culturale Lagunare, prompted archaeologists, who immediately understood the exceptional nature of the discovery to inspect the discovery.

In a short period of time, the Superintendent, in collaboration with the Regional Directorate of Veneto Museums, entrusted the recovery to the archaeologists of the company Malvestio snc of Concordia Sagittaria (Venice), who carried out a stratigraphic excavation, necessary to understand the context and to recover other possible artifacts.

The male figure, wrapped in fine drapery, sits with one arm resting on his knees, and holds the collar of his robe with the other.

He wears a large cloak, which on his head takes the pointed shape of the typical Phrygian cap.

His mood is pensive, probably because he is mourning the death of the person buried in the funerary monument to which he belonged.

That the sculpture likely belonged to a mausoleum is also supported from the location of the discovery, near the route of the ancient Via Annia, along which the necropolis of the city was located.

Experts of the Superintendence and the Regional Museums Directorate will study the find and the context of its discovery in depth, in order to make it available to the public in one of the exhibition spaces of the Museum of Altino, perhaps as early as next autumn.