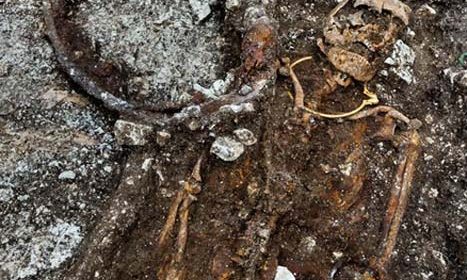 2,500-year-old Celtic tomb with richly adorned body may belong to a Prince or Princess

The discovery of the stunning artifacts found in a rich tomb in Lavau, France, was discovered in 2015, finally coming to light.

Scholars have succeeded in solving the mystery of the tomb’s owner and have provided some other exciting pieces of information on the rich grave goods.

The 2,500-year-old human remains were found in 2015 when archaeologists visited a site to plan for a new commercial centre.

The tumulus was surrounded by a palisade and a ditch. The tomb was said to be bigger than the nearby Troyes cathedral.

The body found in this huge burial mound was accompanied by a chariot, a vase depicting Dionysus, and a beautiful Mediterranean bronze cauldron decorated with castings of the Greek god Achelous and the heads of the lions.

These elaborate artifacts, along with a stunning gold necklace, bracelets, and finely worked amber beads adorning the skeleton, asserted the person’s elite status.

The French archaeological agency INRAP said the treasures of the tomb are “fitting for one of the highest elite of the end of the first Iron Age,” and told the media it is one of the most remarkable finds of the Celtic Hallstatt period of 800 to 450 BC.

Initially, the archaeologists were uncertain to whom the tomb pertained, first stating that a large knife found alongside the remains suggested it was made for a man, however, the rich golden jewelry opened the possibility that a Celtic princess may have been buried instead.

Now, IB Times reports the recent analysis of the shape of the pelvic bones has solved that mystery – it is today known as the ‘Lavau prince’s’ tomb.

The recent analysis of the shape of the pelvic bones has solved the mystery of the tomb’s owner – it was a Celtic ‘prince.’

The recent analysis of the shape of the pelvic bones has solved the mystery of the tomb’s owner – it was a Celtic ‘prince.’ (Denis Gliksman, Inrap )

Furthermore, the recent INRAP analysis of the bronze cauldron has shown researchers that its creator(s) had mastered smelting and engraving techniques. By using X-ray radiography, the researchers have found that the prince’s belt is unique and has Celtic motifs formed with silver threads.

An examination of a knife sheath showed fine bronze threads. The researchers also saw that a gold torc and several gold bangles have marks where they rubbed against the prince’s skin.

This is an important discovery for the researchers as it provides more evidence of a mix of cultural influences and supports the presence of economic and social interaction present amongst Celtic and Mediterranean people in the 5th century BC. As INRAP previously explained :

“The tomb contains mortuary deposits of sumptuousness worth that of the top Hallstatt elites. The period between the late 6th Century and the beginning of the 5th Century BC was characterized by the economic development of Greek and Etruscan city-states in the West, in particularly Marseilles.

Mediterranean traders come into contact with the continental Celtic communities as they searched for slaves, metals and precious goods (including amber).”

The prince’s grave is considered one of the most important archaeological discoveries in France in recent decades and it has been compared to the 1953 unearthing of a grave for the ‘Lady of Vix’.