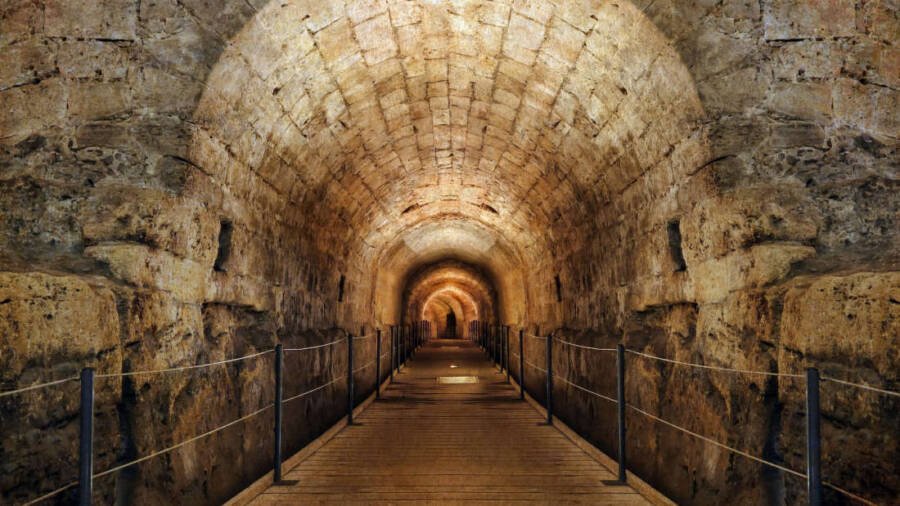 The secrets of the Knights Templar have been unearthed by archaeologists in Israel.

A set of ‘lost’ tunnels leading to a treasure tower were discovered, which the legendary warrior monks would have used to transport their gold around 800 years ago.

Remnants of the soldiers’ extravagant headquarters were also uncovered in the ancient city of Acre, on the coast of Israel.

Years of excavations have unearthed historical relics left by the Knights Templar order, which was disbanded by Pope Clement V in 1312 following conflicts between France’s King Philip IV and the crusading monks.

According to IFL Science, Lin’s team scanned an area in the port of Acre, where the Knights Templar’s fortress headquarters stood some 800 years ago. The LiDAR survey found a sprawling network of tunnels, and what appears to be a guardhouse, buried underneath today’s modern city of Acre.

Researchers believe these tunnels may have connected the Knights Templar’s fortress with the city’s port, allowing the Templars to carry treasure safely to their treasure tower.

“These warrior monks are the stuff of legend, and so is their gold,” Lin said in the documentary. “During the Crusades, the Knights Templar battle for God, gold, and glory. Somewhere in the modern city of Acre lies their command center, and possibly their treasure.”

The city of Acre was once controlled by the Knights Templar for about 100 years after they lost their headquarters in Jerusalem to the Muslim ruler Saladin in 1187. Following the recent discovery, researchers suspect that the Templars’ gold could still be buried somewhere in these underground tunnels.

The Knights Templar monks were trained as skilled fighters with the objective of protecting and advancing Christianity through the means of warfare. The order also successfully raised a tremendous amount of funds to fuel the Crusades.

Uncovering the lost treasure belonging to a religious order of soldier monks from the time of the Third Crusade is an appealing prospect, no doubt.

But researchers have not found any evidence to confirm the existence of gold belonging to the Knights Templar in the city of Acre. Thus, plans to excavate the newly discovered tunnels have yet to be made.

Following the fall of Jerusalem into the hands of Saladin, the founder of the Ayyubid dynasty in Egypt, Pope Gregory VIII called upon Europe’s three Christian monarchs — the rulers of France, Germany, and England — to conduct another crusade to take back the Holy Land.

The first major battle of the campaign was at Acre, located on Jerusalem’s coast. Although the Third Crusade was unsuccessful, it did result in a treaty deal granting safe passage for Christian pilgrims to the Holy Land.

LiDAR technology has been proven to significantly improve methods of scouting hidden artifacts without the need for archaeologists to conduct excavations.

A separate team of researchers in Cambodia recently uncovered a lost city of the Khmer Empire using LiDAR technology.

The ancient site was located deep in the mountainous Cambodian jungles where landmines still covered the fields, making it impossible for archaeologists to have conducted examinations of the site physically.

With LiDAR-driven discoveries popping up around the world, we’re sure to uncover more hidden treasures buried underneath the Earth’s surface — even though those treasures might not all be made of gold.