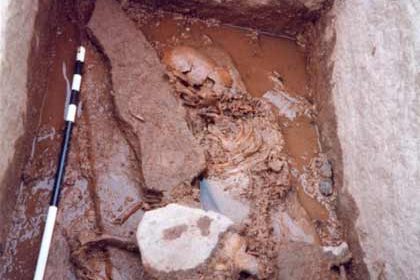 Archaeologists who suspect the body buried on a Scottish island might have belonged to a loom worker or net fisher.

Experts at the Lopness Cist burial discovered a “relatively large” number of animal bones and fragments of shells, lobsters, crabs, sea urchins and starfish, in which the middle-aged or elderly woman was interred between 1890 and 1520BC. Debris and pottery from a capping mound sunk as the lid fell into the coffin.

Lorna Innes, an archaeologist  Says “There does not appear to have been any attempt to repair the cist lid,” archaeologist investigating the burial which was protected from coastal erosion after being discovered by Orkney Archaeological Trust and Historic Scotland.

“The woman was initially placed on the floor of the cist, probably without grave goods or other deposits, and the cist was capped or sealed, most likely by a lid of comprising a number of slabs.

“The presence of a large piece of flagstone that partly crushed the skeleton suggests that no material had been introduced into the cist prior to the roof collapse.

“The cist had become damaged and the burial was disturbed, and it is likely that the situation may have been rectified by the deliberate introduction of offerings – lamb bones and limpets – into the grave.”

Archaeologists say that the limpets could reflect the woman’s marine profession and the lambs may resonate with her role in farming or textile working. Scans showed that repeated physical exertion had caused her osteoarthritis.

“The human remains were in poor condition,” says Dr Julie Ann Roberts. “Although the skeleton was approximately 60% complete, it was in a fragmentary state with a large amount of surface erosion to the bones.

“The right forearm and hand and the left hand were entirely missing. It was also evident that the right-sided skeletal elements and dentition were in a more degraded condition than the left, presumably because the individual had lain crouched on her right side.”

Positioned over the woman’s feet, the goods could have been added by someone with an “intimate knowledge” of the grave in a ritual responding to the unscheduled disturbance, Innes says.

“It is possible that they were deposited within living memory of the burial, as an offering or act of remembrance, as we leave flowers by gravestones today.

“The Lopness cist is an interesting isolated feature but questions still remain as to where the community was located that constructed it, where the midden material came from and whether other cists were placed in close proximity.”

Few parallels to the burial existing in Orkney. A rock-cut burial chamber in Sandwick was found to contain the remains of a foetus, child and two cremated men, left in a food vessel and a “discrete pile” at the centre of the cist.

Carbonised barley cereal grains were also recovered from the deposits in the Sanday cist.