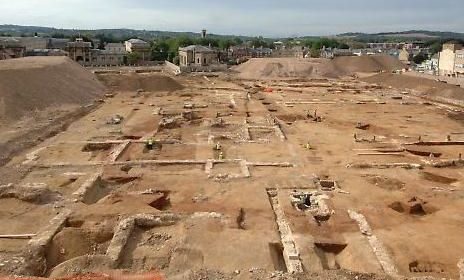 Archaeologists excavating the former Radcliffe Infirmary site in Oxford have uncovered evidence of a prehistoric monumental landscape stretching across the gravel terrace between the Thames and Cherwell rivers.

The work was carried out during the summer to prepare for the Oxford University’s proposed Radcliffe Observatory Quarter, which was announced earlier this month.

Moreover, the study also found evidence of a Saxon settlement of the 6th century, including a sunken, featured craft hut known as a Grübenhauser and a pit containing unfired clay, loom weights.

A team from Museum of London Archaeology (MOLA) has been excavating parts of the 3.7 hectare site.

The excavation uncovered three large prehistoric ‘ring ditches,’ along with evidence of possible cremation burials and an enigmatic rectangular enclosure, findings from which are currently being subjected to radio carbon dating.

Mike Wigg, Head of Capital Projects at Oxford University, said: ‘The University was delighted to provide the opportunity for an investigation of Oxford heritage to be carried out in advance of any development work.’

The River Thames was an important focus for monument building in the Neolithic and Bronze Age periods when monuments used for burial, ritual and social purposes were constructed along the gravel terraces of the river.

A spokesperson from MOLA explained: ‘Ring ditches are, as the name suggests, circular ditches, which are often the remains of ploughed out barrows, that may be associated with burials of high status individuals in the later Neolithic or Bronze Age, about 4000 years ago.’

The archaeologists had suspected the presence of prehistoric remains because a 12th century documentary source records ‘the croft of the three barrows’ in this area.

Parch marks of a possible sequence of ring ditches in University Parks had indicated that similar remains might be present on the Radcliffe site.

The Saxon activity around the much earlier barrow cemetery is not uncommon and is recorded at other similar sites along the Thames.

However, this is the first evidence for such a relationship in Oxford. The archaeologists are now working on the post-excavation phase of the project.