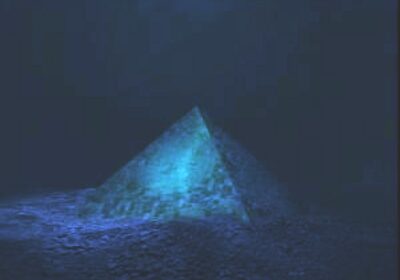 According to David, the child from Inua, the Bermuda Triangle anomalies were created by a massive submerged crystal dating back to the Atlantean times. If this story is proved correct, then it adds more veracity to David’s claims. This is evidence of crystal structures being used in this area a long time ago, or maybe the apparent pyramid could actually be the tip of a crystal sticking out of the ocean’s floor.

Here is the story, just as I found it:

“The Bermuda Triangle: mysterious, unworldly, sometimes deadly. For decades intrepid researchers delved into the maze of mysteries hidden deep within this most enigmatic place on Earth.

Some speculate that bizarre time anomalies, disappearances and weird phenomena can be explained by natural occurrences. Others are insistent that relics of an advanced, unknown culture left behind fantastic technology…great energy machines that literally warp space-time and open portals to other realities.

Now American and French explorers have made a monumental discovery: a partially translucent, crystal-like pyramid rising from the Caribbean seabed— its origin, age and purpose completely unknown.” – (Source)

“These strange underwater pyramid structures at a depth of two thousand meters were identified with the help of a sonar according to oceanographer Dr Verlag Meyer. Studies of other structures like Yonaguni in modern-day Japan have allowed scientists to determine that the two giant pyramids, apparently made of something like a thick glass, are really impressive – each of them is larger than the pyramid of Cheops in Egypt.

Recently American and French scientists as well as other countries that are conducting surveys in areas of the seabed of the Bermuda Triangle, claim to have found a pyramid standing upright on the seabed that has never been discovered. The length of the base of this pyramid reached 300 meters, 200 meters in height, and the distance from the base to the tip of the pyramid is about 100 meters above the sea floor. Preliminary results show this structure to be made of glass or a glass-like (crystal?) material, as it is entirely smooth and partially translucent.

When talking about size, this newly re-discovered pyramid is larger in scale than the pyramids of ancient Egypt. On top of the pyramid, there are two very large holes, sea water at high-speed move through the second hole, and therefore the raging waves roll by forming a giant vortex that makes the waters around this cause massive surge waves and mist on the sea surface. This new discovery makes scientists wonder if this is having an effect on passing boats and planes and could be the reason for all the mystery surrounding the area.

There are several Western scholars who argue that the pyramid on the seabed may have been initially made on the mainland, after which a devastating earthquake struck and changed the landscape completely. Other scientists argue that a few hundred years ago the waters of the Bermuda Triangle area may have as one of the cornerstone activities of the people of Atlantis, and Pyramids on the sea floor may be a supply warehouse for them. Perhaps it is related to the underwater race of humanoids discovered in Washington State in 2004 – the so-called “aquatic ape” beings?

A more detailed study over time will give results that are difficult to imagine. Scientists have processed all of the data and concluded that the surface is perfectly smooth for it to look like glass or ice.

The journalists present in it, have a lot of pictures and high-resolution computerized data, which show three-dimensional pyramids perfectly smooth, without being covered with a surface free of debris or algae or cracks.

There is also a suspicion that the Bermuda triangle and the area where this pyramid was supposedly located may be some sort of “holy grounds” that is being protected by the fabled Atlanteans – that whatever crosses over the location is considered an offering… Others hypothesize that the pyramid can attract and collect cosmic rays, from the so-called “energy field” or “quantum vacuum”  and that this may have been used as an Atlantean power plant (or whoever was around at the time).

With the mystery still surrounding the Egyptian pyramids and the fact that the pyramidal structures seem to be found in almost all ancient cultures – it’s going to be hard to tell for certain the origin of this structure or if it truly exists (we haven’t been down there yet so…) but be sure to check back frequently as we at Apparently Apparel & BeforeItsNews.com try to bring you this kind of news BEFORE it makes it to the rest of the world. That’s why we are here. That is our mission.”  Continue Reading.