Czech archaeologists discover new tomb of an Egyptian princess, are surprised that she was buried among non-royals 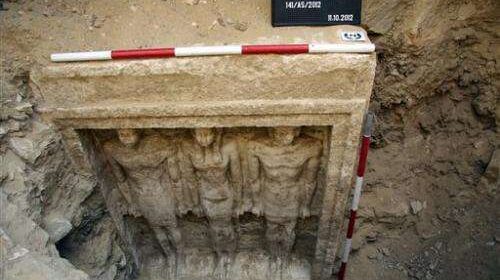 Czech archaeologists discover new tomb of an Egyptian princess, are surprised that she was buried among non-royals

An official from Egypt’s antiquities ministry said Saturday that Czech archaeologists discovered the 4,500-year-old tomb of a Pharaonic princess south of Cairo, suggesting that other undiscovered tombs could be in the area.

Princess Shert Nebti’s tomb is surrounded by the tombs of four high officials from the Fifth Dynasty dating to about 2,500 BC in the Abu Sir complex near the famed step pyramid of Saqqara, according to Mohammed El-Bialy, head of the Egyptian and Greco-Roman Antiquities department at the Antiquities Ministry.

El-Bialy said that “discoveries are underway” at Abu Sir, but that the excavation was still in its “very early stages” and that the site was closed to the public.

Inscriptions on the four limestone pillars of the Princess’ tomb indicate that she is the daughter of King Men Salbo.

“She is the daughter of the king, but only her tomb is there, surrounded by the four officials, so the question is, are we going to discover other tombs around hers in the near future?

We don’t know anything about her father, the king, or her mother, but hope that future discoveries will answer these questions,” El-Bialy said.

The current excavation has also unearthed an antechamber containing the sarcophagi of the four officials and statues of men, women, and a child, he said in a statement.

The Czech team’s discovery marks the “start of a new chapter” in the history of the burial sites of Abu Sir and Saqqara, Ibrahim added.

The archaeologists working at the site are from the Czech Institute of Egyptology, which is funded by the Charles University of Prague. Their excavation began this month.

The discovery comes weeks after the Egyptian government reopened a pyramid and a complex of tombs that had been closed for restoration work for a decade.

Egypt’s vital tourism industry has suffered from the country’s internal unrest in the wake of the 2011 uprising that toppled autocratic leader Hosni Mubarak.

A delegation from the International Monetary Fund is currently in Egypt for negotiations over a $4.8 billion loan aimed at bolstering the country’s ailing economy.