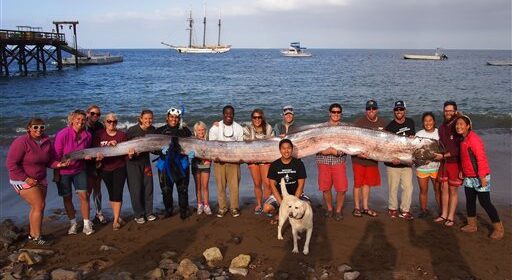 A California marine instructor’s leisurely weekend snorkel turned into the discovery of a lifetime when she found the carcass of a massive, eel-like creature of a species thought to have inspired legends of giant sea serpents.

Catalina Island Marine Institute instructor Jasmine Santana spotted the 18-foot (5.5-meter) oarfish, which is as thick as a man’s torso while snorkelling in clear waters off the island’s coast on Sunday afternoon, the institute said.

The creatures are found in all temperate to tropical waters, but because they dive to depths of 3,000 feet (915 meters), they are rarely seen and remain largely unstudied. Little is known about their behaviour, the nonprofit educational institute said.

“Jasmine Santana was shocked to see (a) half-dollar sized eye staring at her from the sandy bottom,” the institute said in a statement. “Her first reaction was to approach with caution until she realized that it was dead.”

Oarfish have a pug face, a crest running the length of their bodies and a skeleton of bone rather than cartilage common to fish species like sharks. They can grow up to a length of 56 feet (17 meters). Because of their strange appearance, they are believed to have inspired legends of giant sea serpents.

It took a group of 15 adults to pull the fish’s massive carcass up the beach to a better viewing area, the institute said. Its longest-serving employee, Mark Johnson, could not believe his eyes. “In 32 years here,” he said. “I have never seen anything like this!”

The body of the fish appeared almost perfectly intact. The institute sent tissue samples and video footage to a University of California at Santa Barbara fish expert and is awaiting a final determination on the species.

A spokesman for Guided Discoveries, the educational nonprofit that operates programs on Catalina Island, said the sea creature’s skeleton will likely be put on display for visitors.