Heartbreaking Photos Of The Children Of World War II 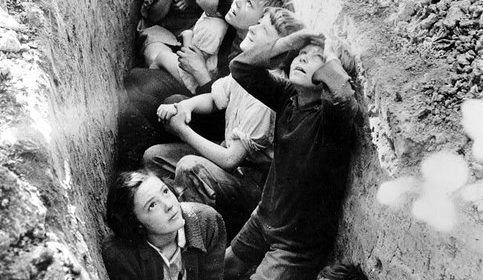 Heartbreaking Photos Of The Children Of World War II

Of course, the impact of war is devastating to all aspects of life in the affected areas, and the normal course of life during wartime is impossible.

They tend to forget that the horrors of war are not only unsettling for the soldiers, widows and parents, but for the children who unfortunately can not have a normal and carefree childhood.

We found a chronicle of the impact WWII had on the Britain school children.

Around 3 million British children were displaced from their homes after World War II, and sent to the countryside.The first mass evacuation took place in September 1939, with thousands of children holding gas mask boxes, a paper tag attached to each child describing who they were and descriptions of their journey. While in the country, the children continued to educate themselves in settings ranging from church halls to pubs – basically wherever room was.

Although no chemical weapons were actually used on home territory against the British during World War II, the children were well prepared in the event of a chemical attack. Sylvia Kaye, who was 16 at the start of the war, said she was incredibly uncomfortable wearing a gas mask.

She said, “It was awful, it was stifling, it was all latex with a kind of plastic front piece for the eyes and you put it right over your face and it was painful.” These children in Kingston, Greater London can be seen walking out of their school during a gas practice test. A canister of tear gas was set off so that the students could test their reactions, put on their gas masks and leave the premises.

Air raids could happen at any time of the day or night so schools had to provide shelter for their pupils. In Gresford, near Wrexham, a purpose-built shelter in the school field served the pupils, which was paid for by Sir Alfred Mc Alpine, of Marchwiel Hall. Here we see the children leaving the shelter after an air raid exercise.

These children from Moorside Road School in Grove Park, London can be seen sketching the damage caused to their school – including missing roof tiles, broken windowpanes and concrete reduced to rubble. The students carried their gas masks when they walked around the school. And the children still used the playground, despite the fact that it had been severely damaged by falling bombs.

Even in the midst of war, there was still time for some simple pleasures – such as imported American cheese. These three school children can be seen enjoying a light snack in the playground of a ruined school in Farringdon in the London borough of Islington (in a picture likely taken in August or September 1941). The school was converted into a feeding centre, and though the building itself was massively damaged, the playground was put to use to sustain the hungry. The cheese that the children are eating in the photograph was imported from the United States as part of the Lend-Lease program.

Schooling was disrupted not only by the evacuations and frequent moves, but also by the threat of bombs. Here, students and teachers from a school in Bermondsey in South London strive for a sense of normalcy.  Roger Taylor, a chemistry professor at Sussex University, was a child during World War II. He traveled extensively with his mother and sister during the war, often moving from one place to the next and from school to school. In fact, Taylor reports that he attended seven different elementary schools and at times didn’t attend any school at all. However, he claimed that seeing “a wide variety of lifestyles and accommodation was a very valuable experience. Surviving the traumatic events of the time made one recognize that every new day was a bonus, a feeling that has never gone away.”

In some cases, teachers were evacuated along with their students, and some were even responsible for finding the children a place to stay once they got to their destination. Gwenllian Ruth Parris (now Clarke), a teacher from Islington, London, was sent with her school to Bedford in the east of England. “We didn’t know where we were going and eventually we arrived at Bedford,” she said. Parris taught cookery and soccer and even worked as a waitress at one point. She added: “There was quite a lot of rivalry between the Bedford teachers and the London teachers. Not personal rivalry but between the two sort of authorities.” Parris ended up sharing responsibilities with local teachers and teaching classes made up of both local children and evacuees.

Wearing a gas mask was a routine for the children during the war, gas mask drills were a common part of the school day for all. Even toddlers are reported to have learned how to put the masks on themselves, often making childish sport of it, irritating their parents by blowing through the rubber and making strange noises. All the same, everyone was taught to keep their gas masks with them at all times and to put them on immediately if they heard the warning sound of the air raid rattle.

These London schoolchildren are in the midst of an air raid drill ordered by the London Board of Education as a precaution in case an air raid comes too fast to give the youngsters a chance to leave the building for special shelters, on July 20, 1940. They were ordered to go to the middle of the room, away from windows and hold their hands over the backs of their neck

The children pictured above are crouching in a crude makeshift air-raid shelter in the middle of World War II. Looks of shock and fear mingle with a kind of awe as they gaze towards the heavens. Many schoolchildren experienced close brushes with death during the war. Professor Roger Taylor had his first encounter with the Luftwaffe while living in Torquay. Taylor, his sister, and a friend were heading home from a playground when the siren sounded. With 400 yards to go and about 30 seconds before the planes hit, Taylor lay down in the gutter. He said, “The planes… were so low that I could see the pilots clearly. Machine-gun bullets were spraying all around.” In the face of such drama and hardship, the disruption of his schooling was, as he puts it, “inconsequential.”