More On Mass Grave In London Result Of Cataclysmic Event 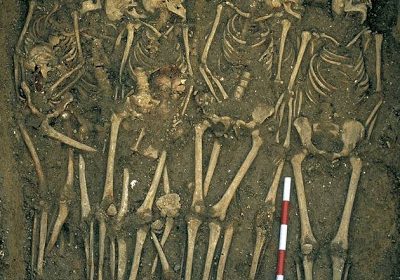 More On Mass Grave In London Result Of Cataclysmic Event

Archaeologists who find thousands of skeletons in mediaeval mass graves in the East End of London claim that these have been the victims of a volcanic eruption of the 13th century, on the other side of the world.

Osteologist Don Walker has worked with the solving of the mystery and has found records that describe “heavy rain,” crop failure and “many thousands of people perished.”

The skeletons were discovered near the Spitalfields Market when the new development of the Spital Square began 20 years ago.

Experts claimed they were victims of the plague for years — but radiocarbon dating didn’t add up.

Now a 10-year ecological investigation by the Museum of London has discovered the likely cause to be a volcano which led to world temperatures cooling down and crops failing, resulting in mass starvation.

Some 10,500 skeletons dating from the 12th to 16th centuries were uncovered by the archaeologists, including mass burial pits which had scientists baffled because the radiocarbon dating didn’t match known events in medieval England like the Black Death or Great Famine.

There was a colossal volcano in 1258 that was even bigger than Krakatau, he discovered. A number of ‘candidates’ put forward include the East Indies and what is now Mexico and Ecuador in the Americas which were undiscovered in the 13th century.

“It’s amazing to think such a massive global natural disaster has been identified in a small area of east London,” said Mr Walker. “I’m always surprised when incredible discoveries like this come to light—this is the first archaeological evidence for the 1258 volcano.”

The effects of this massive eruption were felt everywhere as a ‘dry fog’ descended across the world, cooling the earth’s surface.

It was one of the largest volcanos for thousand of years, according to Bill McGuire, University College London’s Professor of Geophysical & Climate Hazards, who said: “Major volcanic blasts can affect any locality on the planet—it’s not surprising one legacy is an increase in mortality in London.”

The findings are revealed this week in the museum’s study of Medieval burials on the site of St Mary Spital excavated at Spitalfields.