Nephilim Giants Must Of Existed Here’s The Evidence 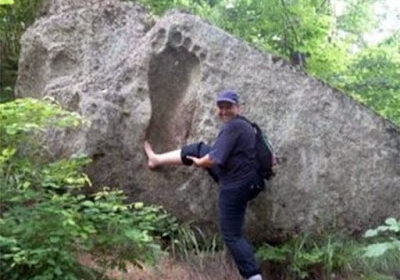 Nephilim Giants Must Of Existed Here’s The Evidence

Nephilim Giants have left their large leg impressions all over the world in the distant past. If you don’t believe this then please explain all these impressive footprints. An amazing collection of 24 Giant footprints.

Guys who are not one weirdo fanatic with a brass or copper chisel travelling from one country to another in the past” and bring his freaky fantasies to reality by chiselling the appearance of a clown foot just to confuse the future lol conspiracy theorists. These are real, ancient, massive-a giant footprint.

I assume we’ve found the footprint of a Nephilim. The ancient Nephilim was real, If you really have valid questions about that, then you can please continue checking out this post and you’ll see an amazing series of images of ancient, petrified sediment footprints from all over the world.

So, who were the Nephilim? Just who was these Giants of the ancient ages of mankind and the builders of well, nothing? There legacy is what?

That’s it, left in these footprints? That’s rubbish. Seriously that’s really crap. If I had massive feet I’d be kicking forest over, kicking something anyways? Probably other Giants.

Did you know David and Goliath the Bible story? Well, the giant Goliath is only 6 foot 9 inches. Hardly a giant. But if you look back on ancient history, everyone is small. Everyone is small in stature.

Columbus was said to be a giant but was only 6 foot he was taller than “any” European of the day. You see, humans have always been small unless you look back on the very early different genealogy then you see that different lines have different sizes.

Europeans where absolutely tiny right, even Hobbit like so how did the early Europeans manage to conquer the entire known world? It’s one hell of a perplexing and wonderfully doomed story of pain suffering and yes, privilege. But only for the few!

But that’s entirely another story. The more I looked into the Nephilim footprints theory the more I became aware that the history portrayed by the west, is open to interpretation and opinion.

Now, that’s not history because history is supposed to be based on facts! It’s not just the west that have “imagination interpretation” because for some reason or another most if not all civilizations of the world have a God story of origins.

Shadowhunters, (link here) also known as Nephilim, are a secretive race of beings who are humans born with angel blood, (I honestly have not measured their feet though). They have fought demons and lived alongside Downworlders in the Shadow World for well over a thousand years, creating their own culture and civilization within human society.

It was a warlock who supposedly summoned the Angel Raziel to create the first of the Nephilim. Although “witch” is generally a term used to refer to mundanes who partake in witchcraft, it is also sometimes used to refer to female warlocks.

But how big were their feet? Well they were absolutely huge! Check out the photo below… It’s obvious to me and you that this must be more than 20 thousand years old, 30 thousand years maybe? Okay what about 50 thousand years ago? The stone here must of originally been flat, but the Earth must have erupted, it’s either slowly moved to it’s current position or it was thrown there by a tremendous eruption of a volcano?

Then there’s this very unique imprinted footprint of what can only be described as a human footprint! I’m sometimes speechless and on this occasion I am.

You can see the indentation of the rock which was caused by the sheer weight of the Giant that made this footprint. It’s not just the footprint itself that’s on show but it is also the fact that the Giant started to sink into the soft ground which has since solidified and then petrified.

A Dinosaur footprint and a human footprint side by side which is definitely unique. But, it also means that everything is wrong with history.

Apparently humans and Dinosaurs didn’t coexist and the fact that these exist means that we’ve caught out the people making up our history. Making it up because if it’s incorrect then it is someones interpretation which is “making it up”.

I like to believe in hatd evidence which I will always believe as opposed to an educated guess. Evidence always trumps the guess.