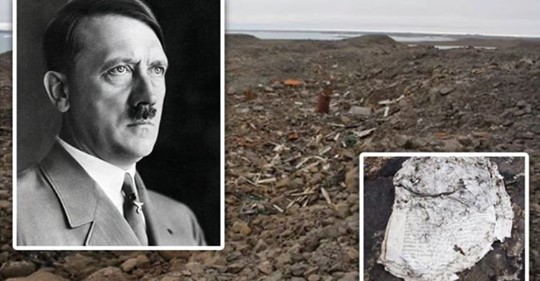 ARCHAEOLOGISTS were thrilled when they found a secret German World War II base in an island near the North Pole that had been untouched for decades with hoards of war-time treasure found for the first time.

The wartime weather station was constructed by the German military on Alexander Land in 1943, called “Schatzgrabber” meaning “treasure hunter.” The large island is located in the isolated Franz Josef Land archipelago in the Barents Sea, more than 680 miles north of the Russian city of Arkhangelsk. Snowy and ice-bound for many years, The sites have last visited in the Eighties, but in 2016, a Russian archaeological team were able to explore and catalogue the remains of the base for the first time.

The lead research scientist at the Russian Arctic National Park, Evgeny Ermolov said in a statement, “This summer was very warm in the Arctic, and so the entire Schatzgrabber area was completely free of snow and ice, which made it possible to explore the area fully.”

Among the finds were the remains of several German army and naval uniforms, and fragments of weapons and ammunition — including rifle and machine-gun rounds, land mines and hand grenades — that were abandoned when the last of the base’s occupants were evacuated by a German U-boat in 1944.

About 10 German meteorologists and labourers were stationed on the island from 1943, as part of a secret network of Arctic stations to give advanced warnings of weather conditions over the northern oceans and northern Europe, which the German military considered essential to their strategic operations.

These artefacts were sent to the Arctic National Park museum in Arkhangelsk for further study.

The team explained that the very dry and almost microbe-free environment of Alexandra Land helped preserve the wood, leather and cloth objects at the sites, as well as many remains of books and documents, including German naval manuals, meteorology textbooks, astronomical tables, weather records, magazines and a copy of Mark Twain’s classic novel ‘Tom Sawyer.’

They also found evidence of the worker’s diets through the remains of sardines, but the team said when he weather station began to freeze and several boats filled with supplies and equipment were crushed by ice, they were forced to take drastic measures.

Mr Ermolov added: “Some of the supplies and equipment sank, and so the diet for the weather over the winter was rather limited.

“It is no surprise that they wanted some fresh meat, and so they killed polar bears because that’s all there was.”

But he added that the weathermen failed to cook the bear meat properly, and almost everyone who ate it suffered a bout of trichinosis, a painful and unpleasant roundworm infection caused by eating contaminated meat.

In response to the medical emergency at Alexandra Land, a daring rescue flight set out from a German airbase at Banak, in Norway, in July 1944, to carry a doctor to the island and to bring back the stricken weathermen, according to the German historian Franz Selinger.

But the large FW-200 aircraft damaged a wheel when it landed and a second aircraft had to be sent from Banak to airdrop a replacement wheel so that the first aircraft could take off with the medical evacuees.

Mr Ermolov said the researchers had to search a very large area, but they were fortunate to find traces of the emergency airfield, including the remains of fuel barrels, tents, batteries, crates, smoke bombs and signal flares made in 1941.

He added: ”Earlier it was only known from written sources, but now we have real proof.” The German base on Alexandra Land was not lost completely to history – after the war, some of the structures were used by the Soviet military until Russia’s Nagurskoye air base was built on the island in the Fifties.

Mr Ermolov explained how a team of German military specialists also visited the islands in the Eighties to remove the minefields that had been planted around the wartime base to protect it from an assault. But he added that the 2016 expedition was the first time that the site has been comprehensively studied and recorded since it was abandoned.

He added: ”We’ve made a complete description of the station and all the remaining objects, including [the remains] of the bunkhouse, the weather station, a network of fortifications and the landing strip where the staff were evacuated in July 1944. The cryptic name of the weather station fuelled speculation that the secret base on Alexandra Land was used for more than keeping a watch on the Arctic weather.

Some theories suggest the base was occupied by a unit of Nazi SS troops and may have had a role in the development of secret weapons, or a search for a mythical “Nordic homeland” in the islands of the Arctic Circle. But historian William Barr told Live Science in 2016 that he thought the base was strictly used for science, and one of about 10 German weather stations on the scattered Arctic islands north of Europe.

Mr Barr said: ”It was quite disastrous — the expedition leader went crazy, and when they were flown out he had to be strapped down to the floor of the aircraft, so he wouldn’t run riot.”

The Russian researchers have found no evidence to back the speculative theories about the Schatzgrabber base. Mr Ermolov continued: ”We have prepared a complete diagram of the station, and geo-referenced all the facilities, including [machinery] that suggests a German origin dating from the time of the Great Patriotic War. “Based on these data, we can eliminate some of the myths that have formed around the station for many years.”