Skeleton of Viking child discovered during excavation in Dublin 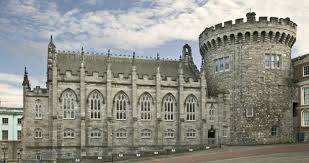 THE SKELETON of a child dating back to the early Viking period has been discovered during an archaeological dig in Dublin.

It was found during excavations near the original Dubh Linn, which translates as black pool and served as the origins for the name Dublin.

The mostly intact skeleton was discovered just before the point where the Poddle river flows into the Dubh Linn near the Liffey River.

In the 9th or 10th century, a closer inspection of the remains showed that the remains were of a child, most likely a boy aged between the ages of 10 and 12.

In a sinister twist, the local archaeologists believe that the boy might have been the victim of foul play, considering the way his body was disposed of.

According to RTE, the body is thought to have been wrapped in a shroud of some kind before it was thrown into the river.

Archaeologists inspecting the remains found the boy’s shoulders were hunched together, while an iron buckle or fastener was also discovered.

Alan Hayden from the UCD School of Archaeology, who led the dig, told the broadcaster the lack of any evidence pointing to the boy being given a proper burial, along with the fact he was dumped in this manner suggests he may have met a violent end.

Hayden is now awaiting the results of further tests which will help to determine not only the gender and ethnic origin of the person but also the date of their death.

The dig, located on Ship Street next to Dublin Castle, has already been the site of several notable discoveries which have further lifted the lid on how the Vikings lived on Ireland.

Archaeologists have already discovered that the original Dubh Linn was much larger than originally thought, extending well beyond the walls of Dublin Castle.

Not only that, the dig was also found the Viking settlement of Longphort was double the size previously thought.