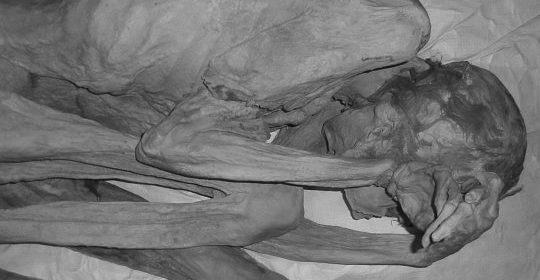 Archaeology discovered World’s oldest tattooed woman was believed that she is Egyptian:

An archaeologist who followed a hunch has discovered the oldest figural tattoo in the world on the bodies of two 5,000-year-old mummies from Egypt.

Infrared images of the mummy revealed tattoos of a wild bull (Bos primigenius) and a Barbary sheep (Ammotragus lervia) on the upper arm of a mummy nicknamed “Gebelein Man A.

” The other mummy, a female is known as “Gebelein Woman,” has linear and S-shaped tattoos on her upper arm and shoulders — markings that are the oldest tattoo ever found on a woman, the archaeologists said.

“Although we tend to think that prehistory (the time before writing) was primitive and rather plain, it is clear this was a sophisticated time and the people must have looked amazing,” lead study researcher Renée Friedman, the director of the Hierakonpolis Expedition, led by the University of Oxfords Ashmolean Museum, in the United Kingdom.

Friedman’s hunch came about after she and her colleague found a Nubian cemetery at Hierapolis in Upper Egypt dating to the early Middle Kingdom, or about 2000 B.C.

The archaeologists found that 3 ancient women buried in the cemetery had extensive tattoos, especially on their abdomens. One womans tattoos were visible to the naked eye, and the tattoos of the other 2 were revealed with infrared photography.

“This was a revelation because we really could not see the tattoos on these other two women without the [infrared] camera,” Friedman said. “This gave me the idea that many more tattoo might be undetected and the tradition may go much further back than the Middle Kingdom.”

At the time, Friedman was a research curator in the predynastic collection at the British Museum, so she “decided to try [her] camera on the well-preserved Predynastic mummy there” that had good skin preservation and weren’t hidden in mummy wrappings, she said.

She analyzed 7 mummies and found tattoos on two of them — the naturally mummified Gebelein Man A and Gebelein Woman, which date to about 3351 B.C. to 3017 B.C.

“The discovery pushes back tattooing in Africa by over 1,000 years,” Friedman stated.

Both mummy are from Egypt’s predynastic period before the country was unified under the 1st pharaoh in about 3100 B.C. Archaeologists Excavated Gebelein Man A about 100 years ago, and he has been on display almost continuously since then, the researchers stated.

When Gebelein Man A was young, between 18 and 21 years old, he died from a stab wound in his back, according to previous computed tomography (CT) scans, the researchers said.

The new infrared images analysis shows that black smudges on his arms are actually the tattoos of two overlapped horned animals — likely a wild bull with elaborate horns and a long tails, and a Barbary sheep with curving horns and humped shoulders, the researchers said.

The tattoos are not superficial, either — who ever made them applied a carbon-based pigments (likely soot) to the deep, dermis layer of the skin.

It is not clear what these tattoos meant, but perhaps they were symbols of strength or even marks of successful hunts, Friedman said. Or, maybe they were protective image, she said.

In contrast, Gebelein Womans tattoos did not show animals, but rather a series of 4 small S-shapes running over her right shoulder. Below these markings is a linear motif similar to ceremonial objects that are held by figures painted on ceramics from that period, Friedman said.

Perhaps this line represents a crooked staff, a symbol of power and status, or a throw-stick or baton used in a ritual dance, the Analyst said.

It would have been easy to see the woman’s tattoo when she was still alive, and they might have conveyed her status, bravery or perhaps magical knowledge, the researchers said.

Both mummies are roughly contemporaries of the 5,300-year-old Ötzi, the Iceman mummy discovered in the Italian Alps in 1991. Ötzi has 61 geometric tattoos on his body.

Some Analyst has hypothesized that Ötzi’s tattoos had medicinal purposes, as they were placed by known acupuncture points. However, “Unlike Ötzi, there is no indication that [the Egyptian tattoos] had a medical reason,” Friedman said.

Researchers have also found an ancient toolkit dating to the same period as Gebelein Man A and Gebelein Woman.

The kit, discovered in a Predynastic grave, was buried with an older woman between the ages of 40 and 50 years old, Friedman said.

The kit included a bird-shaped palette likely used for grinding cosmetic ores, such as ochre, with a rounded pebble, all of which were discovered in a basket, Friedman wrote in “Ancient Ink: The Archaeology of Tattooing”. The basket also contained bone awls, which could have been used for tattooing, she said.

“The presence of such awls as part of a kit including pigments, resins, amulets, and incense in the grave of an older woman’s at Hierakonpolis suggests that tattooing was in the hands of specialists and accompanied various rituals and ceremonies,” the researchers wrote in the new study.