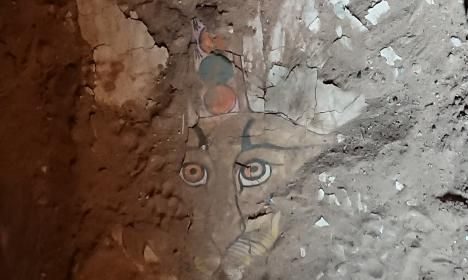 Excavation of an ancient city of the dead in Aswan, Egypt, recently revealed fragments of a sarcophageal lid that had been decorated with the colorful face of a leopard.

The first image showing a digital reconstruction of the artwork fragment discovered in a necropolis containing 300 tombs dated back to the seventh century B.C. has now been published by archeologists.

Most of the wide-eyed face of the big cat is visible in the picture. When the lid rested on the sarcophagus the leopard’s head would have aligned with the mummy’s head inside, University of Milan representatives said in a statement.

According to the statement. In ancient Egyptian culture, leopards reflected determination and power; according to the description, the representation of the animal in the tomb was probably intended to strengthen the spirit of the recently deceased for the journey to the land of the dead.

The leopard sarcophagus necropolis was in use for about 1000 years – up to the fourth century A.D. —An excavation was done in accordance with a statement published in April 2019, by an international team of experts with the Egyptian-Italian West Aswan Group.

Other tombs held a total of 35 mummies and a number of funerary objects, such as pots of bitumen for mummification, linen and papyrus funeral masks, and food offerings for the trip to the afterlife.

“We made the discovery at the end of January 2019, but just finished the ‘virtual’ restoration of the fragment,” Patrizia Piacentini, director of the excavation for the Egyptian-Italian Mission at West Aswan, told Live Science in an email.

A nearby tomb held another extraordinary find: a bowl holding plant material that turned out to be pine nuts. Though the nuts were not native to the region, they were known to have been used by chefs in Alexandria, according to a Roman cookbook called “Apicius” that was compiled in the first century A.D., university representatives said in the February statement.

One recipe described soft-boiled eggs in a sauce made with pine nuts, ground pepper, honey and anchovy paste, according to a translation that appeared in the book “Around the Roman Table: Food and Feasting in Ancient Rome” (The University of Chicago Press Books, 2005).

As for why the pine nuts were left in the necropolis, “We like to imagine that the people buried in the tomb of Aswan loved this rare seed — so much so that their relatives placed a bowl next to the deceased that contained them, so that they could feed on them for eternity,” Piacentini said in the February statement.