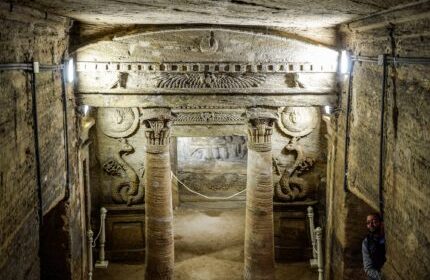 The catacombs of Kom El-Shoqafa are masterpieces of rock-cut funeral architecture, one of the most impressive examples of Greco-Roman and Egyptian and religious synchretism.

In the second half of the 1st century A.D, they were built. Throughout the 4th century, it was first used by a single wealthy family and then expanded into a mass burial site likely accessible only to dues-paying members of a funerary corporation.

Kom El-Shuqafa is Arabic for the Greek name of the necropolis, Lofus Kiramaikos, meaning Mound of the Shards after the broken pots left behind by people visiting the tombs who did not want to reuse the vessels after they had been associated with the dead.

It was discovered in 1900 not by the archaeologists who had been excavating the area since 1892, but by a local man transporting stone who broke through the vault of the tomb.

Like the catacombs in Rome which were its contemporaries, Kom El-Shuqafa’s necropolis is an extensive network of corridors, chambers and loculi (burial niches) dug out of the rock. There is a ground floor chapel and three levels beneath it containing more than 100 loculi and sarcophagus tombs.

Unlike the Roman catacombs which were built to contain the remains of Christians and Jews, this tomb is exclusively polytheistic. What makes it so special is the rich blend of Hellenistic, Roman and Egyptian iconography and architectural features.

In the central niche of the main tomb is a bas-relief depicting the traditional Egyptian scene of the mummification of Osiris. The dead god is laid out on a bier in the shape of a lion.

The bier is flanked by Thoth at the head and Horus at the foot, while Anubis stands behind the center of the bier performing the ritual.

Even so there are anomalous elements, like Anubis’ long robe with a mantle draped over his shoulder as opposed to the traditional kilt. A classic Greek egg and dart design adorns the wall above this relief.

Reliefs of the Apis Bull decorate the left and right niches of the main tomb. In the left niche,
the bull is faced with a man wearing the traditional Egyptian kilt and the Double Crown of Upper and Lower Egypt. He offers an opulent collar to the bull.

The crown indicates that this is a representation of the Roman emperor embracing pharaonic iconography and religious ritual. Again the egg and dart motif is carved above this scene.

These depictions of a Roman emperor worshiping the Apis Bull are only found in this tomb. Nothing comparable has ever been found in Alexandria or the rest of Egypt.

In the early 20th century, the catacombs were hailed as one of the Seven Wonders of the Medieval World. If you’re thinking “that’s weird as the necropolis is clearly not medieval,” don’t be alarmed. Most of the others on the list (the Colosseum, the Great Wall of China, Stonehenge, the Leaning Tower of Pisa, the Porcelain Tower of Nanjing and Hagia Sophia) weren’t either.

The catacomb has been endangered by groundwater seepage since its discovery. The third level has been submerged for close to a century and the high moisture content causes the flaking of the limestone bedrock damaging the reliefs and wall paintings.

In 1985, the Egyptian Antiquities Ministry installed a permanent pumping system to drain the water, but it was insufficient to resolve the issue.

With funding the United States Agency for International Development (USAID), Egyptian authorities launched a new program to modernize and upgrade the drainage system.