The 1,000-year-old ship found underneath ground on Norwegian island 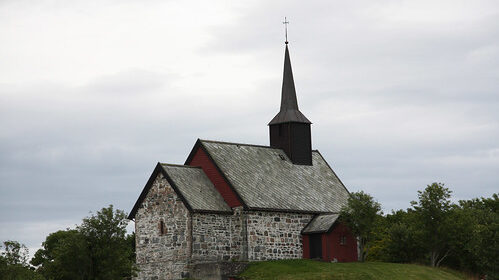 The 1,000-year-old ship found underneath ground on Norwegian island

Archaeologists found a huge Viking ship buried just underneath a farmer’s field in Norway, thanks to a coincidental search of the region with ground-penetrating radar.

According to researchers at the Norwegian Institute for Cultural Heritage Studies, the approximately 17-metre-long vessel is believed to be over 1,000 years old (NIKU).

According to a news release from the institute, the vessel appears to have been purposefully buried beneath a circular mound during Norway’s Merovingian or Viking age.

It was found alongside the remains of two ancient homes near a church that still stands to this day.

“This is incredibly exciting,” Dr. Knut Paasche, head of the institute’s department of digital archaeology, said in the news release. He said it’s just the fourth well-preserved ship burial ever found in Norway.

“This new ship will certainly be of great historical significance and it will add to our knowledge, as it can be investigated with modern means of archaeology.”

Researchers found the boat through a stroke of luck. They were initially scanning the area in September to study the buried ruins of an ancient settlement that once stood in modern-day Edøy.

Their aerial scans just happened to turn up a large, sliver-shaped object buried under a thin layer of topsoil in a nearby field.

They also saw the circular outline of a ditch that would have surrounded the ancient burial mound atop the vessel.

“This is a very common trait for grave mounds,” NIKU archaeologist Dag-Øyvind Solem told Ars Techa. He said the moat likely had symbolic meaning for the Vikings, in addition to making the mounds “seem bigger than they really were.”

Archaeologists say both ends of the boat appear to have been destroyed by farmers’ plows.

Edøy was the site of two major sea victories for Harald Fairhair, the first king to unite Norway in the late ninth century, the museum says.

Paasche says the Vikings’ advanced ships allowed them to maraud throughout ancient Scandinavia and England.

The ships were designed to move using either sails or large teams of rowers, so the Vikings could propel their vessels at high speed through open water or shallow rivers.

“They made ships that no one else could cope with for 200 years,” Paasche told the Post.