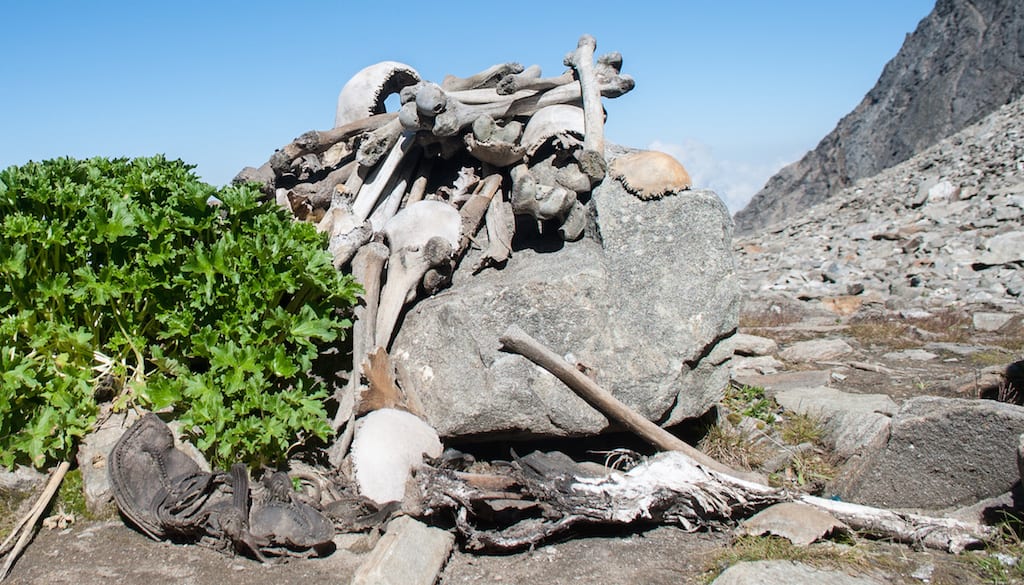 The view of an enormous pile of skulls and bones tangled under the water surface is quite enticing. You wonder who they are, and especially how they came here first because that lake is 16,000 feet above sea level and there is nothing more than ice tops and frozen glaciers around it.

Every year, the ice melts and shows the human remains of more than 300 unfortunate people who rest at the bottom of the Roopkund, better known as the Skeleton Lake. This frozen, frozen, shallow lake is hidden deeper into the Indian Himalayas.

This “spectacular” view can be enjoyed in the core of the dark forest of Lohajung in Uttarakhand, India, by any enthusiastic trekking enthuse who wishes to walk down the steep path up to the glacier lake, which most of the moment is frozen, in a tiny valley elevated in the Garhwal section of the Himalayas.

However, the ice begins to melt and the surface begins to see for a month when the temperature is sufficiently friendly. Then, the six-foot-deepest depth of the lake demonstrates what lies underneath the small and apparently typical natural wonders.

This is a death-ground filled with skeletons and not only that, but also the hair, nails, spears, knives, and gems, preserved by the frosts as if these souls had been decimated and found mysteriously their way into the bottom of this lake.

This stunning mystery has been tried by scientists, anthropologists, and historians to unravel. In 1942when the contents of the lake were first found by a British forest guard, Remains of unfortunate Japanese soldiers passing through the mountains were believed to be recent humans.

On the snow just outside the lake, the guard stumbled over a human skull, and on the basis of the preservation with a complete bunch of hair, it took on the most probable scenario. He submitted a report soon after founding more skeletons nearby and below the frozen lake surface.

And his hypotheses seemed logical at first. But there was no inquiry of the bones, and nobody knew who they were, what they were and what had occurred. So obviously, in moments of conflict, the authorities had the same initial conviction that these are the residues of a military battalion that passed through the hills in the direction of India.

But all these first impressions came down the drain after a more thorough inquiry, when spears and all sorts of various old arms or bars were discovered lying next to the bones, and it was evident comprehensive research of the remains needed to be done.

The mystery had been unresolved for some moment and many theories were brought to life about what had occurred. People even accepted a local faith in an old goddess who would lay waste to a group of individuals who defied her.

The legend says that this goddess was so furious by the group of people who ostensibly passed by her unspoiled shrine in the mountains that she flung iron hailstones over these petty disrespectful people and killed them on the spot. The legend said she was so furious.

In recent studies, it has been found, in fact, that the skulls and their shoulders have clear signs of round-shape blows as if they had been struck from above.

In 2004, the lake received samples and research from an expedition led by a team of Indian scientists with a few Europeans.

During the progress of DNA testing, the bones and some of the preserved human tissue could now be examined. The common belief was that the skeletons were the remains of people who over the years were killed by severe weather and sudden storms on the hills and slipped into the lake with snow, which prevented the natural process of decomposition

Although the bodies discovered that their height and body are distinguished, Almost all remains from the same time, at about 850 A.D., are found in the Radiocarbon Accelerator Unit of the University of Oxford, UK. In addition, two separate body types with similar DNA were found.

A group of smaller and thinner people and one completely the opposite. This resulted in them to think it had to be a pilgrimage group or a kind of mountain excursion which hired local guides. Sadly, a baseball-style hail storm murdered them on their manner trapped in a valley and nowhere to find a shelter. That’s the recent scientific research at least.

One group of shorter individuals with smaller and thinner bones, and one completely the opposite. Which led them to believe that it must have been a group on pilgrimage or some kind of expedition in the mountains that hired some local guides. Unfortunately for them, trapped in a valley, and nowhere to be found with shelter, they were killed by a baseball-sized hail-storm. This, at least, is based on recent scientific research.

According to the historical Himalayan legend of the ancient goddess, a king went on a pilgrimage in India to the Nanda Division Raj Jat Festival only once every 12 years, with his spouse, family, servants, musicians and other.

They hired locals to help them get there, but along the way, and despite locals telling them otherwise, the goddess Nanda Devi was angry and punished with their loudness. But most of all, a pregnant woman was in the group that presumably gave birth in the sacred land of the goddess.

The newborn was the biggest sin of all and she had “hard-as-iron” sent out a storm of hailstones and murdered them.

Although it wasn’t the goddess ‘ wrath, it was certainly the fury of what killed hundreds of people.

At least part of a legend clarified the mystery well before science. That means something completely distinct until more information and further research are revealed. This should be followed by a science or academic institution because sadly all trekking passers-by pick a bone or two as souvenirs, and very shortly there might be nothing left to be studied.